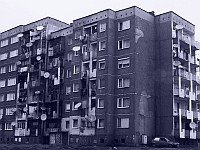 Jore and Kotze are two brothers who have never met before. Now, the unfortunate death of their grandmother brings them together for the first time in their lives. Jore is 26 years old. Coming from an older generation and adherent to the underground culture, the rebel inside him has always prevailed – electronic music is his inspiration and the graffiti are his freedom as an artist. Kotze is 14 years old and he has let himself to be taken by the current of the Bulgarian reality. Infected with Pop-Folk music, he uses every opportunity to steal or get into a fight. Despite their differences and the numerous brawls, the two brothers unite their forces in the search of a buried treasure, bequeathed by their grandmother. Getting to know each other and the post communism Bulgarian society they soon find a way to one another, to tolerance and understanding. After many adventures and unexpected encounters, they never find the treasure but they do discover the meaning of true friendship.